The Registeration issue has been fixed. Please feel free to register an account!

Under covid-19 conditions, where every family member is at home (work & education), I wanted to redesign my home-office network. I've got two Zyxel GS1200-8 switches and have the following design in mind:

* VLAN 1 - outside towards Internet / will not be used unless emergency
* A dual NIC SBC based router/firewall connecting VLAN 1 to Internal-user-network (public WiFi et.al.)
* VLAN 64 - Internal-user-network ("semi-militarized-zone")
* An Ubuntu 20.04 box (office file etc server) with 3 NIC's (w. router, firewall). One connected to VLAN 64, the other two forming a "bond" and 4 VLAN's / subnets on that bond (VLAN 128 / admin, VLAN 160 / admin devices, VLAN 192 / users, VLAN 224 / user accessible devices). These vlans are prioritized/routed, where VLAN 128 should access all others, 160 can access 192 and 224 etc.
* One of the GS1200-8 switches is server-side, the other on the other office room side. They are connected with LAG2. The server-side switch is connected to the server with LAG1.
* I have a controller PC (Win 10) in server room with 3 NIC's: I want one to connect to VLAN 128, second directly to VLAN 1 (in case the server is down/updated etc). Third NIC is floating for test/support purposes. 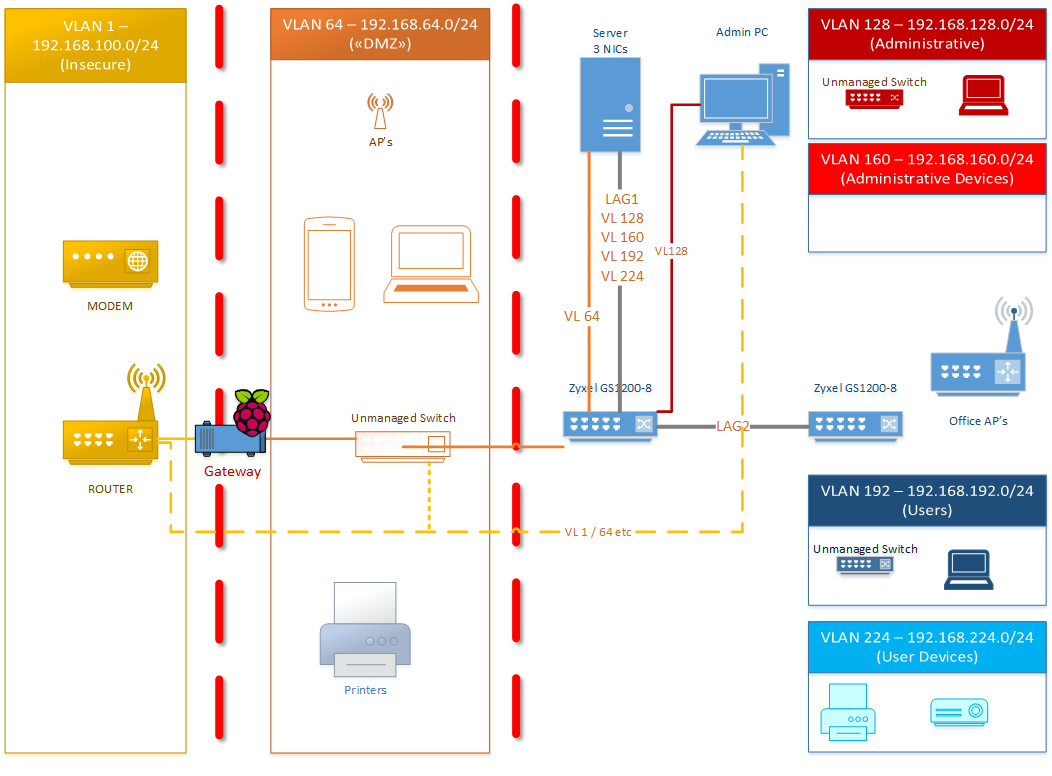 As the title says, I'm new to VLAN's (I only saw them in my ADSL modems-routers). Although I read a lot on VLAN's, I failed to configure the switches on multiple trials, where I lost my connection to the server/switch and sometimes I needed to reset the switch(s). Mixed terminology does not help either. I know this setup is an overkill for an home-office but this is how I learn (i.e. as a 57 years old computer engineer)...

To my understanding I need this:

Are these assumptions correct?
In which net segment should I put Zyxel switches?