Efficiently Create Dedicated SSID for each AP through “Programmable SSID”

For a large scale of Wi-Fi application, such as a hotel, which requires each AP to broadcast its dedicated SSID, Nebula provides “Programmable SSID” to allow users to complete the configuration fast and efficiently. With only 3 simple steps, the configuration can be completed in a single page all together without the hassle of customizing setting for each AP one-by-one.

Figure 1: In a hotel application scenario, each AP is required to broadcast the SSID of its room number

To configure, just simply enable the “Programmable SSID” in the SSID overview page (Access Point > Configure > SSID overview). When enabled, we can see two additional columns appear. By typing the commands in these two columns, we can finish the configuration without the hassle of customizing each AP’s setting across different pages. 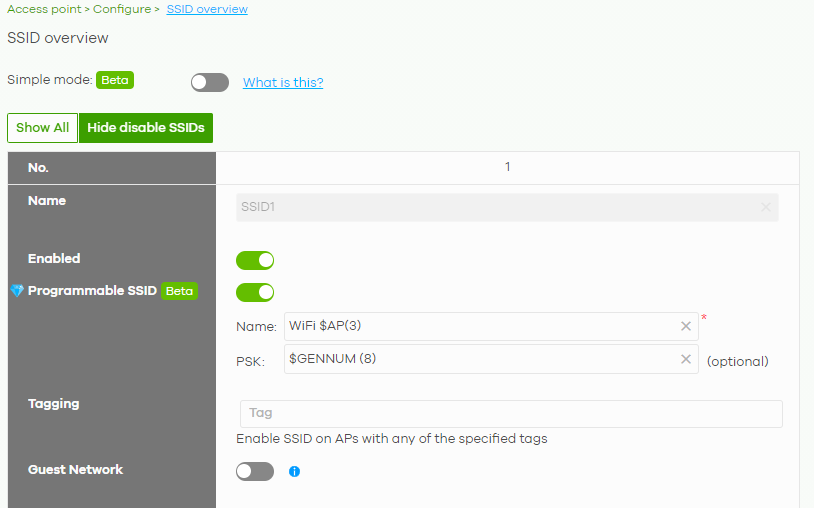 Naming Rules in the “NAME” Column

In the name column, we can use the combination of “general characters” and commands with “$” so that different AP can have a common part in their SSID name while differing in the rest part set by the command.

Naming Rules in the “PSK” Column

For the password generation, there are two available commands:

For example, by using the command “Wi-Fi $AP(3)”, we can configure each AP to broadcast its signal with a common “Wi-Fi” as the prefix, and the first three letters of its device name as the suffix.

(P.S. The Device name can be further edited in each AP’s detail page through the directory Access Point > Monitor > Access Point > [Select a Specific AP] > Edit the Configuration)

Through the command “GENNUM(10)”, the password will be a random ten numbers. After we created the SSID and PSKs, we can export the table to see the password for the Wi-Fi network broadcasted by each AP.

Figure 4: Example of using commands in “PSK” Column and export the table

Figure 5: Change the PSK of a specific AP